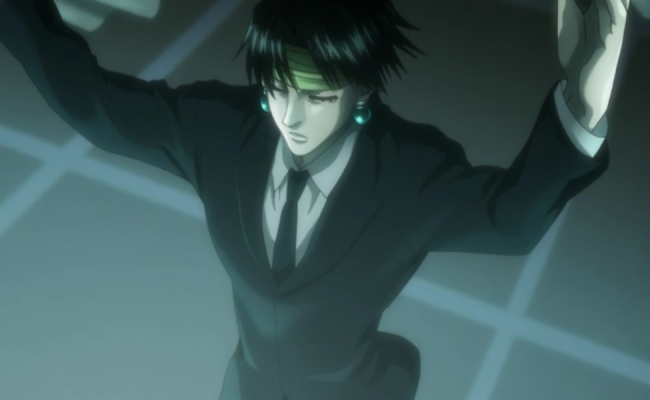 Chrollo (voiced in Japanese by Mamoru Miyano and in English by Robbie Daymond) is the founder and current leader of the Phantom Troupe is the anime/manga Hunter x Hunter.

The outfit I’ve chosen for this article is the disguise that he wears in the York New arc when he’s infiltrating to steal Neon Nostrade’s nen ability, though he does have several other outfits that will be featured in another article later on.

Chrollo has soft grey eyes, and while he usually wears his hair slicked back, for this outfit he wears it loose and down, with a greenish grey ribbon covering the cross tattoo he has on his forehead. He wears the bauble earrings that he usually has on for this, but the rest of it is a pretty standard suit jacket and pants over a white shirt, black tie, and black oxfords finishing off the look.