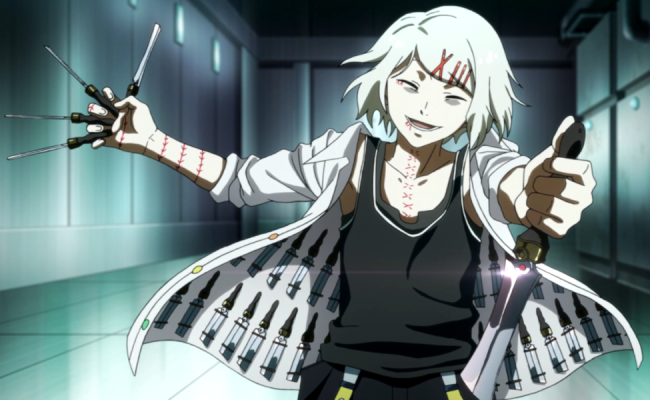 Juuzou (voiced in Japanese by Rie Kugimiya and in English by Maxey Whitehead) is a Special Class Ghoul Investigator from the anime/manga Tokyo Ghoul.

While he looks (and acts) like a character that probably wouldn’t be considered as one of the good guys, Tokyo Ghoul is a series that is fantastic at turning your expectations in character writing on their head, and makes good guys/bad guys a very grey area.

In the early half of the series, Juuzou has chin length wavy creamish white hair, held in place by hair clips arranged to form a XIII, red eyes, and stitches all over his body (self sewn). The outfit he wears is a pale pink shirt with details on the sleeves and colorful buttons, a black undershirt, blue and yellow suspenders, black capri pants with yellow and red patterned leggings underneath, and red house slippers.

(Click here for the Tokyo Ghoul: Re version of the character)