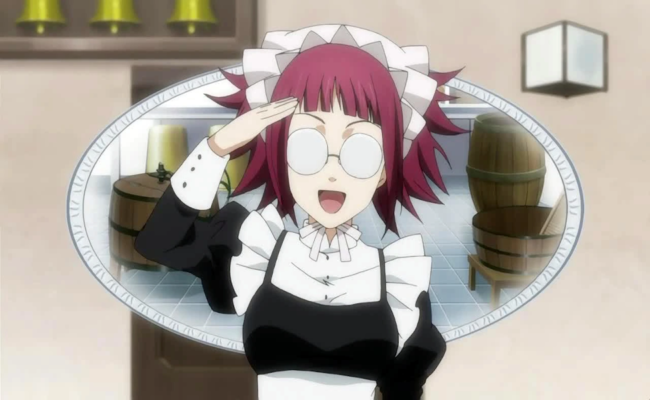 Meirin (voiced in Japanese by Emiri Katou and in English by Monica Rial) is part of the housekeeping and defense staff in the anime/manga Kuroshitsuji/Black Butler.

After spending the early years of her life as an assassin, she gets taken in by Sebastian after trying to attack Ciel, but ends up being hired on as the family’s maid and defensive sniper. She is often a clumsy maid when tasked with the duties she’s formally hired as, but is a very sharp-sighted sniper when she takes off her glasses.

She has pinkish-red hair usually worn up in pigtails and topped with a maid’s headband, and has hazel eyes that are usually hidden behind the round-rimmed glasses she was gifted upon joining the staff team at the manor. Meirin’s usual outfit is standard maid-wear with a black dress and white apron combo, but the way Nina Hopkins crafted her outfit, it allows her to pin up the skirt to the apron buttons, to expose her sock gartered leg and long black lace up workboots.

View the Meirin from Kuroshitsuji costume guide at Carbon Costume…