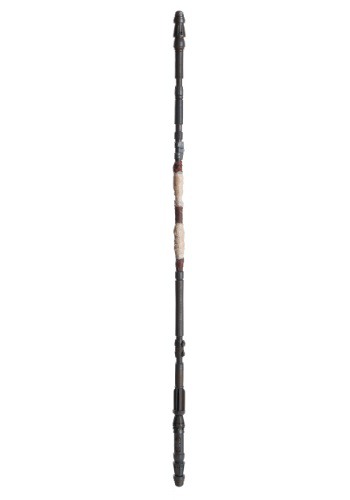 The Star Wars galaxy is filled with more technological wonders than we can count! There are massive space cruisers and nimble fighters that can easily leap between star systems like it were just a quick trip around the block. And the weapons used, while powerful and deadly, are just as awe inspiring, ranging from the unbelievably destructive Death Star super-laser, down to the clumsy but trusty blasters. And who could forget the elegant and mystical Jedi lightsaber, or the intimidating and lethal… stick? Oh wait, this isn’t any old stick, it’s Rey’s Staff from Star Wars The Force Awakens! She built this quarterstaff weapon out of salvaged parts from the starship graveyard on Jakku. It definitely came in handy when defending herself and her home against any unsavory types around the wasteland, and it’ll come in handy when you’re dressed up as Rey, too! At least, until you can find a weapon for a more civilized age.