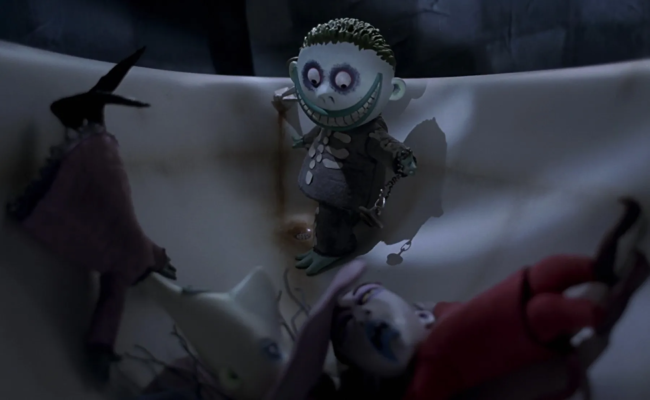 Barrel, voiced by Danny Elfman, is part of the trio of antagonistic Trick or Treaters in the 1993 movie The Nightmare Before Christmas, along with Lock and Shock.

He is presumably the youngest out of the group, and has pale blueish tinted skin, wide eyes with black and purple-red smearing around them surrounding black pupils, turquoise lips, and slicked back wavy green hair.

Barrel wears a costume similar in build to Lock’s, with it essentially being pajamas, but his are greyish or purple (depending on the version) with white stand-out bone detailing on both the shirt and pants. In line with the other two, he also has a trick or treating mask, with his being a white skeleton face that mimics his own. 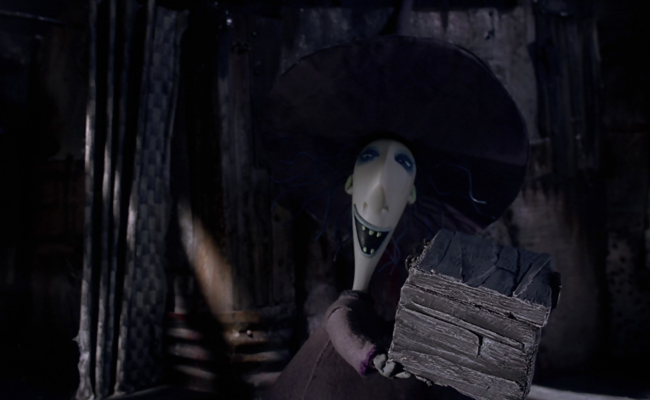 Shock, voiced by Catherine O’Hara, is part of the trio of antagonistic Trick or Treaters in the 1993 movie The Nightmare Before Christmas, along with Lock and Barrel.

She has pale green tinted skin, black eyes, stringy and curly deep turquoise hair with the same color around her eyes, and lighter turquoise on her lips.

Shock has a typical sort of witch costume, with a dusty purple hat with a ribbon, a dress of about the same color depending on the version (Kingdom Hearts has a lighter pinkish dress instead) with a darker purple trim around the collar, hem, and sleeves, and wears a green witch mask to go with her costume.

She has what appears to be grey gloves on, and what looks like black thigh high boots (you can probably go with just regular witch boots instead, with the tights listed above, and have the same effect).

Xenoblade Chronicles 3 has been five years in the making and it shows. Monolith Soft’s latest open-field JRPG odyssey has more systems and more to do than either previous game in the trilogy (not to mention the often overlooked Xenoblade Chronicles X). I’m enjoying it a ton so far. I’m also learning lots of useful……

END_OF_DOCUMENT_TOKEN_TO_BE_REPLACED

Video games provide an opportunity for team building, relaxation, and vicarious experiences you couldn’t have anywhere else, but for couples where one person is more interested in them than the other, video games might only produce the inconvenient question: should we break up? In a relationship, the video game… Read more… Source