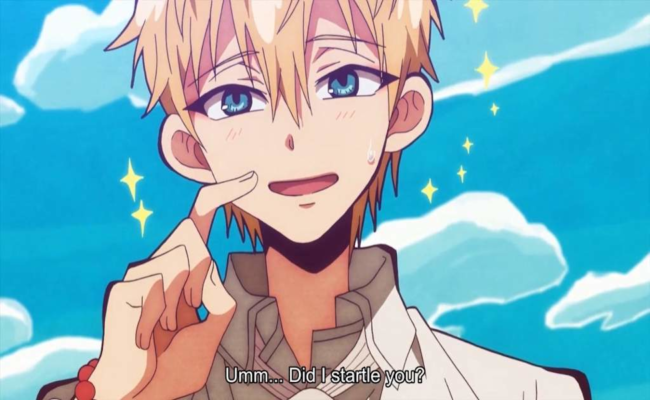 Teru Minamoto (voiced in Japanese by Uchida Yūma, and in English by David Matranga) is one of the secondary main characters of the anime Toilet Bound Hanako-Kun, and the Student Council President at Kamome Academy, in their High School division.

Teru is the oldest of the three Minamoto siblings, the younger ones being Kou and Tiara, and to his knowledge, the strongest exorcist out of the three (that’s heavily debated once his sister shows immense strength in that field at age 5).

While his brother has readily befriended the ghosts that their family had been previously sworn to exorcise, Teru does not show any of this kindness, and is more than willing to brutally take down any spirits that cross his path.

He has a similar appearance to Kou, with slightly fluffier and blonder hair, but the same color blue eyes. His typical clothing we see him in is the Kamome uniform, but instead of a blue shirt like the others, he wears a long sleeved white one instead. Teru carries around an assortment of exorcist tools as well, such as assumedly prayer beads on a bracelet, and his sword, usually attached to his belt. 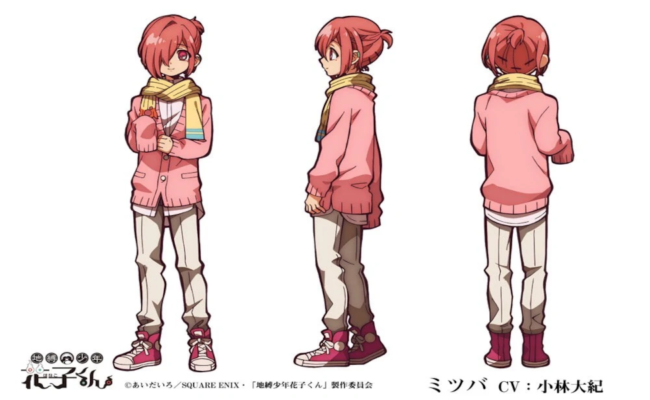 Sousuke Mitsuba from the anime/manga Toilet Bound Hanko-kun is a new, ghostly, addition to the radio broadcasting team at Kamome Academy, along with Tsukasa Yugi, Sakura Nanamine, and Natsuhiko Hyuuga, and was a member of the photography club when he was alive. He is voiced in Japanese by Daiki Kobayashi, and in English by Kyle Igneczi. He has pink hair tied up in a ponytail with red hairclips holding flyaways back and pink eyes with a blue highlight, one of which is covered by his bangs, and an ear-cuff styled earring. He became a ghost much more recently than the twins, so his outfit is the current Kamome Academy uniform, but with a pink cardigan over it, one sleeve draped over his injured arm, eggshell pants, deep pink shoes, and a long yellow scarf with one side striped in blue detailing, and the other ripped and stained with presumably blood from the accident he was in. 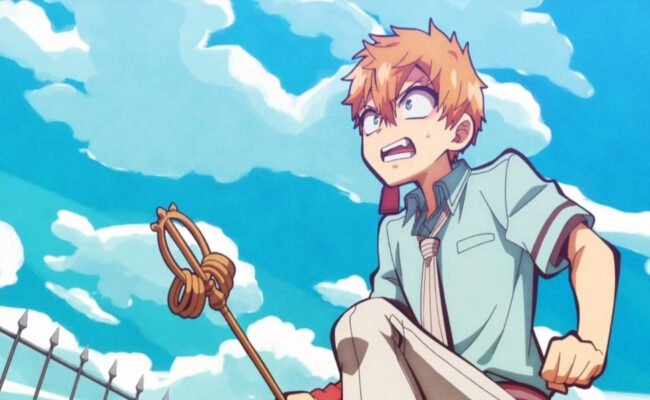 Kou Minamoto is part of the main trio of characters in the anime/manga Toilet Bound Hanako-kun, and is voiced in Japanese by Chiba Shōya, and Tyson Rinehart in English. Kou is a current Middle Schooler at Kamome Academy, and the younger son of the Minamoto family of exorcists, with his older brother Teru and his younger sister Tiara also part of the trade. He has bright orange spiky short hair, light blue eyes, sharp teeth, and wears an earring with a traffic safety amulet dangling from it, while his main outfit is the current Kamome school uniform, with a light blue shirt, eggshell pants, black undershirt, striped belt and tie, red wristband, and white and green shoes. In addition to his daily uniform, he also carries around an exorcists staff. 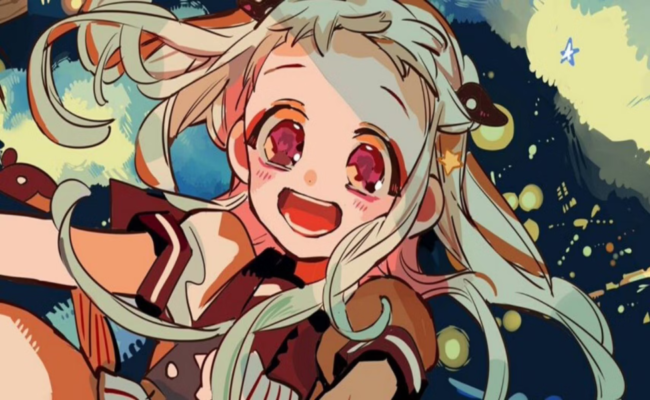 Nene Yashiro is one of the main characters in Toilet Bound Hanako-kun, voiced in Japanese by Akari Kitō, and by Tia Ballard in English. Nene is an unlucky in love high school student at Kamome Academy, who ends up meeting Hanako the bathroom ghost from following the school rumor he’s attached to (Hanako-san) and getting tangled up in not only her feelings for him, but also all the ghost shenanigans happening at the school. Nene has two toned hair, in a light brown fading to a soft mint green, multicolored pinkish-orange eyes, and she wears her school uniform with a few personal accessories, such as a skull brooch, hairclips, and tights instead of socks. 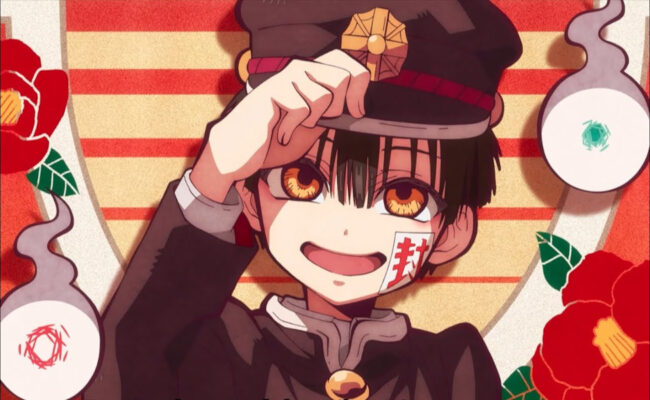 Amane Yugi (also referred to in-series as Hanako) is the titular character in the anime/manga Toilet Bound Hanako-kun, voiced in Japanese by Ogata Megumi, and by Justin Briner in English. He is a physically 13-year-old ghost bound to the bathroom in Kamome Academy High School, tied there for over 50 years attached to the Japanese urban legend Hanako-San, and is the leader in charge of keeping the other holders of the school’s legends in line. He is close friends with Nene Yashiro and Kou Minamoto, but seems to fear his twin brother, Tsukasa Yugi, due to their past. Amane has golden-orange eyes, short and choppy black hair, a white and red seal affixed to his face, and his outfit consists of the Kamome Academy uniform from the 1960’s, with an overlaying cloak and a matching hat, with a kitchen knife he carries with him as a weapon.