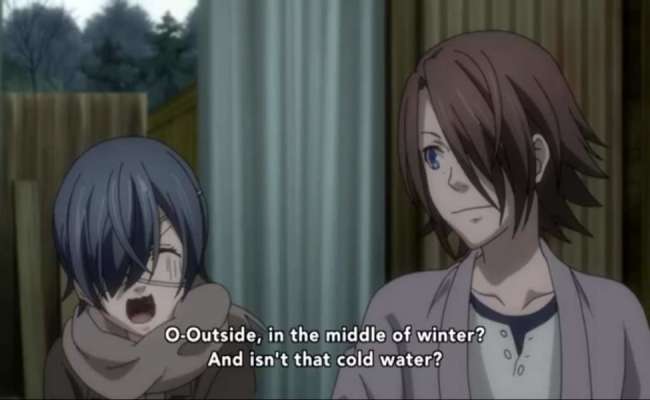 Doll (Voiced in Japanese by Ayahi Takagaki and in English by Mikaela Krantz) is one of the first-string members in Noah’s Ark Circus, in the anime Kuroshitsuji/Black Butler.

She is the tightrope walker specialist of the circus and has an elegant persona while on stage, but also goes by the name Freckles, which is a lot truer to her actual personality.

Doll has one visible blue eye, the other covered by heavy facial scarring from burns, and choppy auburn hair that falls over the damaged eye. The outfit she wears as Freckles is light but also layered, as it’s fairly cold when the circus is running. It consists of a navy blue long sleeved shirt, with a white top button shirt over it, and a greyish lavender cardigan. Her pants are brown capris with differently shaded pockets, and brown lace-up boots. 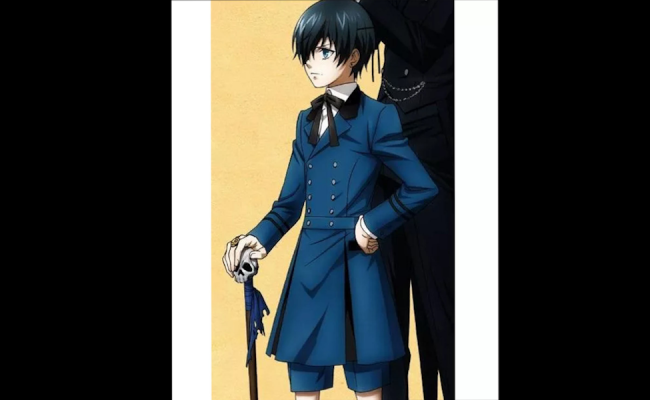 Ciel Phantomhive (voiced in Japanese by Maaya Sakamoto and in English by Brina Palencia) is the main character in the anime Kuroshitsuji (Black Butler).

Despite being barely a teenager, Ciel is ruthless in getting what he wants, including going down illegal paths or enlisting the help of his battle trained staff, as well as his demon butler, Sebastian. He works as a watchdog for the Queen and heads the Funtom Corporation that he inherited after the murder of his family, which he is still seeking revenge for (though if you’re reading the manga, that’s become a bit tricky lately).

While the color changes a bit between different seasons and OVAs, his hair is usually a blueish grey in color, and he has one vibrant blue eye, with the other one hidden behind his usual eyepatch being a deep royal purple, the Faustian contract he shares with Sebastian overlaid on it.

Ciel has several outfits throughout the series, but this one in particular is one we see a bit more than others. Starting with the accessories, these don’t tend to change, he has blue stud earrings, a black eyepatch, and two family-associated rings. The outfit itself starts with a white button up shirt, a black bow at the front, a long blue coat with matching blue shorts, black socks held up with black sock garters, and then black and white heeled oxford saddle shoes. 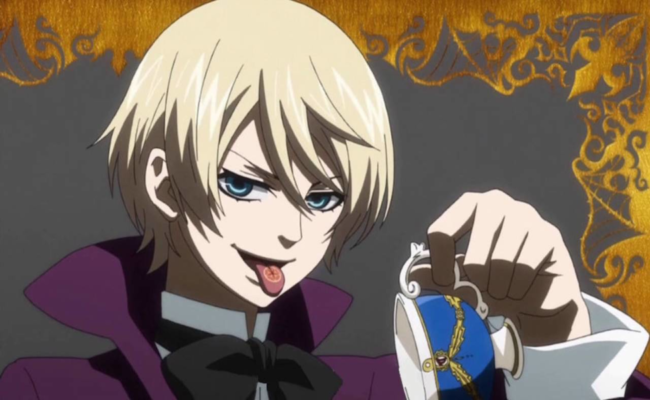 Alois Trancy (voiced in Japanese by Nana Mizuki and in English by Luci Christian) is the partial main character of the second season of the anime Kuroshitsuji (Black Butler).

The second season of the anime switches around between Ciel and Alois being the primary main character, with them bouncing off each other in explosive ways. Alois also has a demon butler (Claude), but he also has an additional hand over Ciel with the entire rest of his staff also being demons.

While outwardly putting out a bratty and stubborn persona, Alois is, like Ciel, highly traumatized by the events of his past, and uses his bad behavior as a defense mechanism to protect himself.

Alois has light blonde hair about the same length as Ciel’s, light blue eyes, and one main outfit that he’s seen in throughout the series. He does have a few other costume outfits and situational ones, but this one is the one we mainly see.
He has a white button up with loose sleeves, a large decorative bow at the front, a long purple coat with a standup collar, a green vest with black detailing, a pair of black short shorts, thigh high stockings, and tall brown heeled boots with purple lacing topped with a large purple bow. Like Ciel, he also has a ring he wears, a gold one that looks like an eye, with an inset ruby.