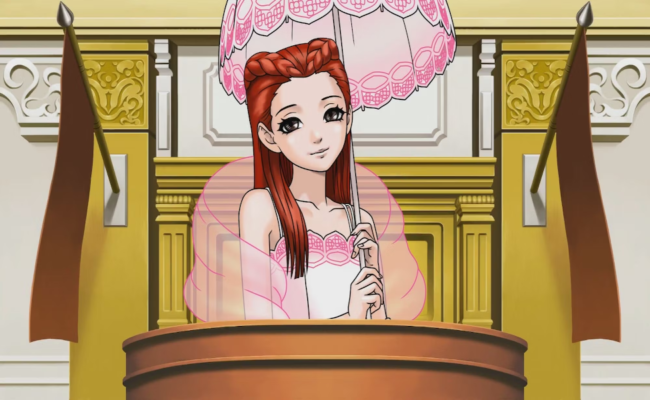 Dahlia Hawthorne (voiced in Japanese by Rina Satō and in English by Dani Chambers) is one of the key characters in Phoenix Wright’s backstory, debuting in Turnabout Memories, the first episode of the third Ace Attorney video game, Trials and Tribulations.

She has a long string of plots and attempted/completed murders connected to the plans she’s tried to pull over the course of the past events of that case, including pretending to be Phoenix’s girlfriend in college, and causing mass amounts of misfortune to befall a large chunk of the cast at that time.

Dahlia likes to portray a more innocent act to make people believe her more in court and in general, and has a very soft appearance, with a gentle face.

She has straight auburn hair that falls to her mid-back, pulled into two styled braids at the top, grey-brown eyes with emphasized lashes, and she wears a white strappy summer dress with pink trim detailing, a sheer pink shawl, white chunky open toed heels with white butterflies on them, while carrying a domed white parasol with a pink sheer trim, and has white butterflies with pink wing tips flying around her in most of her sprites.