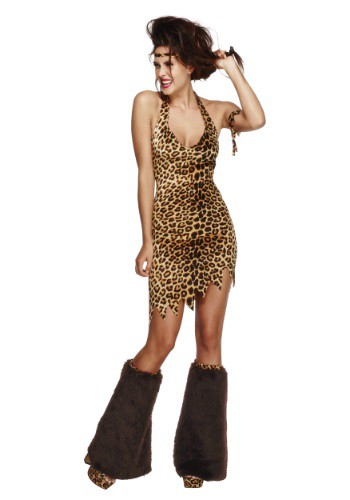 You’ve traveled back to an era long, long ago in the past (probably about one million years B.C., give or take…), when humans, dinosaurs, woolly mammoths, and sabertooth tigers walked the planet together — and not always peacefully. It was a time when all that people had to keep them warm against the elements (remember, the only heat came from fires) were leopard skins and sweet mammoth-fur boots. As hard as it was, the cavemen and women looked absolutely fantastic in their duds. So, when in Rome, right? You can be sure that they’ll welcome you into any cave you take shelter in when they see you in this Women’s Fever Cavewoman Costume!You’re look every bit the prehistoric queen when you suit up in this head-turning Stone Age outfit. The curve-hugging halter dress has that classic leopard print and a jagged, uneven hemline for a truly “wild” look (because we’re pretty sure they didn’t have tailors or seamstresses back then!). The arm band and the head band (which fits easily and comfortably thanks to the modern wonders of elastic, but your cave friends won’t know the difference) matches the dress and proves that paleolithic folk knew how to color-coordinate! And for true head-to-toe coverage, the costume also includes a pair of awesome leg warmers. Don’t worry, you can just explain to your new tribe that they came from a species of majestic creatures called “faux,” which haven’t evolved yet.So to make the most out of your adventure into the time before time, be sure that you’re seen by cavemen and dinosaurs alike in this incredible Women’s Fever Cavewoman Costume! Because who says prehistory has to be lacking in style?